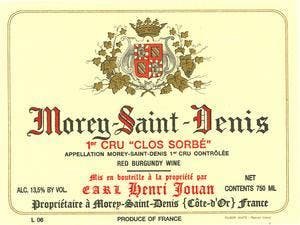 This small estate is run by Philippe Jouan, though overlooked still with great attention by father Henri.  Father and son, during my visits anyway, seem to spend their entire time in amicable contradiction, the one correcting or modifying every sentence uttered by the other. Henri is in his 70s, but , despite the bickering, is, I’m certain, a very useful consultant to his son. The estate is tiny, only 3 hectares split over 10 parcels for the 5 crus produced. Vines are between 45 – 70 years old. But there is even less than 3 hectares-worth of wine to bottle as Maison Joseph Drouhin have been long-standing customers since Henri first began making wine, fifty years ago. Both father and now son rely on empirical experience in wine making and élevage and claim that nothing has changed in these fifty years. The grapes are de-stemmed, fermented at a temperature “controlled” in the French sense of the word by Henri’s hand on the side of the tank! They like a quick malolactic fermentation and they rack off the lees straight after.

Philippe continues to use his 100 year old wooden press, used by his father’s grandfather. Winemaking here is approaching its century too, dating back to when when Philippe’s great grandfather, a cooper, first bought some vines in Morey. I have often repeated Philippe’s father Henri’s simple words when we first met: ‘Nous faisons des vins pour nos clients qui aiment le fruit’ (we make wines for customers who like fruit) and this goes some way to summing up the style. ‘Purity’ and ‘freshness’ would also be very relevant descriptors. But Philippe is sensitive and responsive to the conditions of the year – ‘une année solaire’ as he described 2018. Where acidity levels were challengingly low, and acidification was necessary, for some producers at least, Philippe used a tiny quantity of verjus, (unripe grape juice), which he fermented with the ripe grapes. This seems to have helped to preserve that crunchy fresh fruit liveliness which makes his wines so charming and accessible and which is also an important part of the character of the wines from this domaine.

He applies a short cuvaison of 12-14 days with gentle extraction, then an early malolactic followed by a year in barrel with 25 -40% new oak from François Frères. A few barrels are still sold to Maison Joseph Drouhin. His boys are still teenagers, but his elder son, Thomas, aged 17, is all set to follow on in the family tradition.

After regular price increases in recent years, the prices this year are a little lower.

Philippe sums up the wines modestly saying they make wine “pour nos clients qui aiment le fruit”. The wines are delicate, supple, beautifully-perfumed and forward. Village wines are in 30 % new oak, Clos Sorbé 40% and Clos St Denis 70%. The wines are all bottled, corked and labelled by hand, unfined and unfiltered.