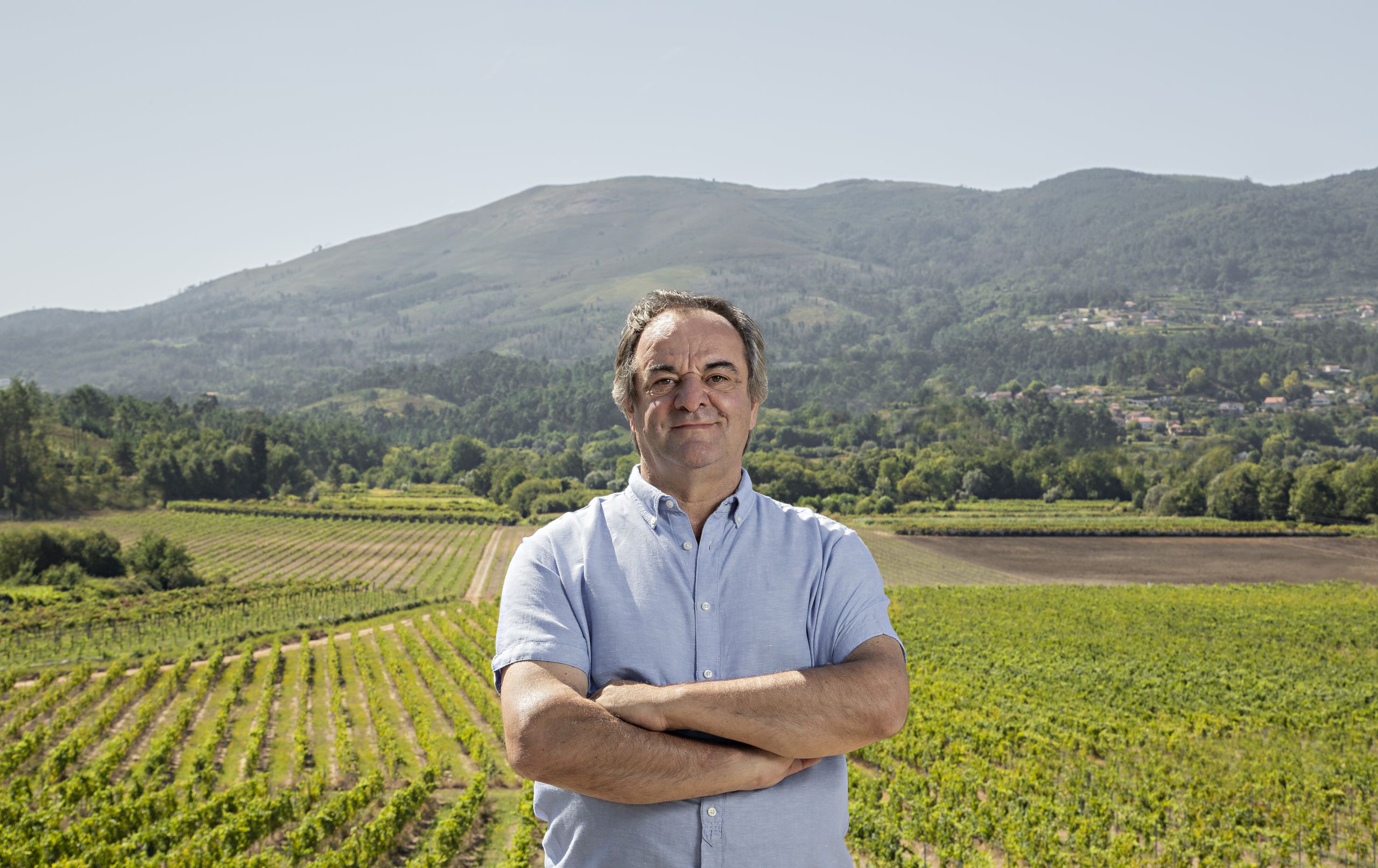 On the face of it, this is a small family-run operation involving Anselmo and his wife Fernanda, Anselmo’s brother, and now his son Tiago and a few employees. They are based in a little hamlet called Penso between Monção and Melgaço, a stone’s throw from the River Minho which marks the border with Spain. But in fact, Anselmo’s name is seriously well-known in Portugal, associated with dozens of other wines from all over the country. His involvement as a consultant in these different projects varies. In some cases, he is blending and endorsing the wines; in others, he is fully involved in viticultural consultancy for his clients, and winemaking and blending too. All this puts quite a strain on his big Mercedes, which drives the length and breadth of Portugal many times a year.

He’s a lad from Monção, the heartland of the Alvarinho in Portugal, and it is his success with this variety for which he is best-known. He has a boyish, infectious enthusiasm for everything he does, particularly if it involves the Alvarinho grape. He has put his oenology training to good use in understanding the grape and the best ways to grow and vinify it; he is particularly interested in, and keen to demonstrate with mature bottles, just how much potential the Alvarinho grape has to age, particularly given the support from fermentation in oak.

The latest project from the man who cannot sit still involves the renovation of the 50 hectare Quinta da Torre, just outside Monção. Wines have been made from here since the 14th century. These vineyards now form the main source of his grapes.  He has now completed the purchase of the estate together with its medieval buildings and tower, which he is in the process of renovating. The plan is to create a visitors’ centre in these old buildings.

Since 1998 he has been a leading light in Vinho Verde, showing not just Portugal but the wider wine world beyond just how good the wines from his home region can be. All the wines come under the appellation of Vinho Verde. These wines are not just light, refreshing summer wines; some of them are low yield, concentrated and serious wines, with complexity and depth of flavour.

Watch a video of Anselmo explaining his winemaking philosophy and his dedication to the Alvarinho grape variety (in Portuguese with English subtitles):

Alvarinho Contacto. The name refers to the 12 hours of skin contact before the grapes are pressed, something which Anselmo had been studying for a number of years. The current vintage looks great, tight and intense on the palate with a real depth of flavour and length.

Muros Antigos Alvarinho comes from the hillside vineyards on poor sandy soils and stays 4 months on the lees with batonnage. Here we find the viscosity, intensity and generosity of the Alvarinho, well balanced by crisp acidity.

Muros de Melgaço Alvarinho is harvested from granitic soils and fermented in old oak with a small percentage of new oak used. The wine is then further aged in barrel for 6 months on lees. It is a richer, riper, more concentrated style; orange, grapefruit and spicy flavours but taut and persistent.

Curtimenta Alvarinho is fermented on the skins for 48 hours and aged in 400 litre old oak barrels for 9 months. The grapes chosen for this wine are the ones with higher sugar and acid levels. This is an Alvarinho with both the depth and structure to age but equally the roundness and elegance to be served young.

Vinhão. A bottle of elegant red fun, light but soft and juicy. We all love this in the office, a wonderfully different and sappy red.

Magma Verdelho, Azores: Anselmo finds a good challenge hard to resist, and thus it was that the Magma project came about. The vines are grown at Biscoitos, on the north coast of Terceira island. This is one of the Azores archipelago – almost half way to the USA , crossing the Atlantic from Europe. In collaboration with the growers from the cooperative of Bicoitos and his friend Diogo Lopes, this project is bringing about the viticultural renaissance of the region. It is not the only such project. Other producers on other islands too are beginning to give the Azores an international reputation for something DIFFERENT. (We like ‘different’).
The Azores (Açores) have been a province of Portugal – like Madeira – since the days of the Portuguese Discoverers in the early 15th century. Vines have been planted since the early times, on the volcanic soils. Conditions here are different: the vines need protecting from salinity and from strong winds, so the system of “Curraletas” has grown up, where plants are surrounded by a 3’ high walls that rather resemble square animal pens (but with no gates!). These are hand-crafted, dry stone creations, made of the black basalt which is all around.
Anselmo sums up the wine up with three words: ‘Atlantic’, ‘Mineral’, ‘Volcanic’. Different varieties are used throughout the islands, some of them indigenous. With Magma we have Verdelho dos Açores, which appears to be the same varietal as the Madeiran Verdelho, but is different from the grape known as ‘Verdelho’ on the Portuguese mainland. It is reported that cuttings of Verdelho from the Azores were taken to Australia in the 19th century.
We are talking infinitesimally small scale production here: less than 10 hectares for the whole region of Biscoitos, and low-yielding plants. The wine is dry, unoaked, tangy and salty. The very definition of unique.